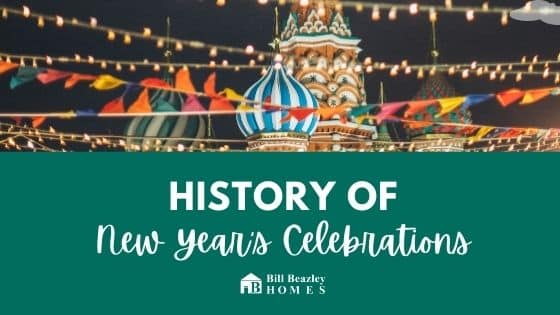 Ever wonder why we celebrate New Year’s the way we do? Here is a little history on how we got to the modern-day ball drop and champagne toasts.

The earliest recorded New Year’s festivities date back around 4,000 years ago to ancient Babylon. For them, the day in March that had equal amounts of light and darkness began their New Year. They would celebrate with an 11 day religious festival.

Around 46 B.C. Julius Caesar worked with prominent astronomers and mathematicians to introduce the Julian calendar, which added more months to help align  the calendar with the sun. During this reform, Caesar declared January 1 the start of each new year. The name came after Janus, the Roman god of beginnings.

In the 500s A.D. in medieval Europe, New Year’s celebrations were considered pagan and were abolished, but replaced with days that hold more religious significance such as December 25. In 1582, when the Gregorian calendar was reformed, Pope Gregory XIII re-established January 1 as New Year’s Day. Most Catholic countries adopted the change right away, but the British Empire did not accept this change until almost 200 years later.

The most iconic tradition in the United States today is the New Year’s Eve ball drop at Times Square in New York City. It has taken place almost every year since 1907 and the ball itself has progressed over time from a 700 pound orb made of iron and wood to a nearly 12,000 pound sparkling ball that is 12 feet in diameter. The ball drop was inspired by the maritime tradition of dropping a time ball so sailors could adjust their chronometers while they were out at sea. Various cities across the country have adopted their own version of the famous NYC celebration as well.

Fireworks are a custom around the world as well as singing songs to help ring in the new year, such as “Auld Lang Syne”.

There are different ways to celebrate New Year’s, whether you are in a small town or traveling to Times Square. It is typically a bittersweet moment to pass from one year to another, but we are probably all ready to see 2021 now!