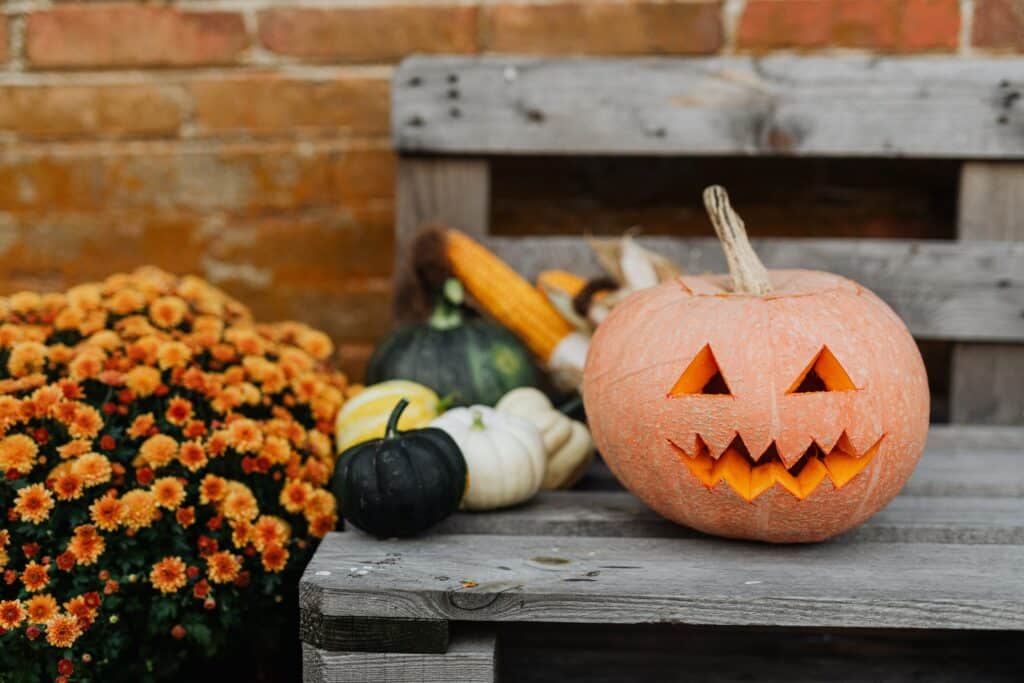 You truly can’t celebrate Halloween properly without a jack-o’-lantern. So in this article, we’ll show you how to make one and then tell you the story behind this iconic Halloween tradition.

The first step to making a jack-o’-lantern is you have to gather everything you need. You’ll need a spoon, two knives (one small and one large), a marker, and a pumpkin.

You’re going to cut a hole around the stem. This hole has been large enough for your whole hand to hit in. Once you have figured out good size, you’ll insert your knife at a 45-degree angle and cut the circle.

Tip: mark the circle with your marker so the size of your hole doesn’t change as you cut it.

Now you could use a spoon or your hand. But you’ll have to remove the seeds and the rest of the pumpkin’s inners.

The next step is to sketch the face you want your jack-o’-lantern to have. You want to make sure your sketch is how you want your decoration to appear, or it might look different than what it should look like.

Now, you’re all set! Carve the face! Once you have that done, discard the pumpkin’s inners and seeds. You can even toss the pieces onto a compost pile for your garden. Then place the stem back onto the pumpkin, and boom! You have your jack-o’-lantern.

Tip: Make sure you have a sharp knife, so you don’t have to put additional effort into craving your jack-o’-lantern.

The Folkore Behind Jack-o’-lantern

There are various tales about the man called Stingy Jack and his interaction with Lucifer. However, the simplest one goes like this.

Jack was considered a sinful man. And as such, Lucifer came to collect his soul. Jack sought one last drink at his favorite tavern, so Lucifer indulged and drank with him.

However, neither could afford to pay the bill. So Jack told Lucifer to turn into a silver coin so that he could pay their bill. Then he could transform back, and they would proceed into the afterlife. Lucifer agreed.

However, instead of paying the bill, Jack placed the Lucifer coin into his wallet and put a cross over it. Trapped, Lucifer agreed never to collect Jack’s soul if released. Jack accepted his deal.

When Jack died, he was not allowed into heaven or hell. Lucifer handed Jack a lump of burning coal and mockingly told him to search the Earth for a resting place.

Not understanding Lucifer’s joke, Jack took the burning coal and placed it into the first ever jack-o’-lantern (made from a turnip). He now roams Earth, looking for his final resting place.

The Significance of Jack-o’-lanterns

Many people used them to scare children and even adults off their properties. Others used jack-o’-lantern to scare off spirits and ghosts who might be in the area.

And now, the lanterns have become synonymous with one of America’s favorite holidays: Halloween.

A Brief History of Halloween

Halloween first started as All Hallows’ Eve. The celts marked it as the summer’s end and the harvest’s beginning.

And later on, early Christians claimed it and gave it the name, All Hallows’ Eve. It came right before All Hallows’ Day or All Saints’ Day. During All Saints’ Day, people dressed up as devils, angels, and saints and celebrated with bonfires and dinners.

But it was not until the late 1800s that people began dressing up in other costumes. And eventually, the holiday went from a Christan celebration to a secular holiday.

No Jack-o’-lanterns, No Halloween

Ever since the 1800s, people have associated the jack-o’-lantern with Allhallows Eve. And now, in the modern day, nearly every household celebrating the holiday has one in their home.

It’s become so associated with Halloween that most people see the jack-o’-lantern as the first sign that the holiday is coming. That’s why the decoration is present in nearly everything related to the event.

If you eradicated jack-o’-lanterns from Halloween, the dress-in-a-costume-day wouldn’t feel the same.