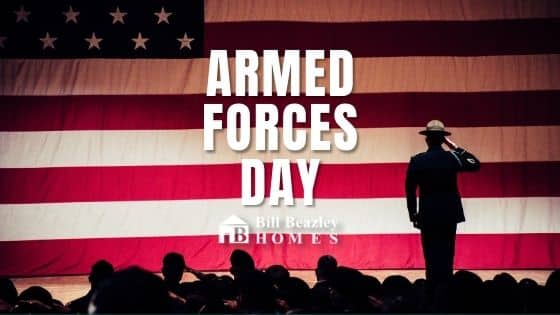 May 15, 2021 will be Armed Forces Day. It is on the third Saturday in May each year and is part of Military Appreciation Month (along with Memorial Day and Military Spouse Appreciation Day).

The Defense Secretary in 1949, Louis Johnson, created Armed Forces Day to replace the separate days held for the Army, Navy, Coast Guard, Marine Corps and Air Force. The aim was to unify the armed forces under one agency, the Department of Defense. The first Armed Forces Day was celebrated across America in 1950. It brought parades, receptions and air shows across the U.S. as well as 10,000 troops from all military branches marching in Washington, D.C. By 1961, former President John F. Kennedy declared it a national holiday to honor the military and all of its strength.

Not only is Armed Forces Day celebrated in the United States, but other countries honor this day for their armed forces as well. Some of these include but are not limited to: Armenia, Australia and New Zealand, Bulgaria, Canada, Chile, Egypt, France, Japan, Mexico, Russia, Spain and the United Kingdom.

Armed Forces Day contains a new theme each year. The very first year was “Teamed for Defense”. Other previous themes have been “Appreciation of a Nation”, “Freedom through Unity”, and “Patriotism”. As of the writing of this blog, a theme for 2021 has not yet been announced.

To celebrate locally, visit the Evans Towne Center Park in Evans, Georgia for the annual Thunder Over Augusta event. Gates open at 5:30 pm and the event will begin at 6:15. Expect an evening of music, a tribute to those who serve our country and one of the largest fireworks shows you’ll ever see. There is no ticket charge for entry, but there will also be multiple food vendors set up around the park to purchase snacks and dinner.